Open Data Day is a gathering of citizens in cities around the world to write applications, liberate data, create visualizations and publish analyses using open public data to show support for and encourage the adoption open data policies by the world’s local, regional and national governments. 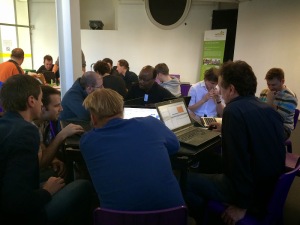 We got two working groups here at Open Data Day 2015 Vienna. A group of 10 People analyzed and visualized all subsidies given by the City of Salzburg in the year 2012 and 2013. This full and complete dataset will be published in the near future, to bring full transparency into Salzburg’s subsidy regime.

Another group of 15 started a new citizen sensor data project. We built first seven sensor boxes based on Arduino which measure sun-hours, traffic density, noise, NOx and respirable dust, alike. Together with the city wide public sensors owned by the city administration, this new citizen sensor network bring more local and more frequent data to be used in APPs and analysis. It’s planned to present the running citizen sensor dashboard at viennaopen.net (April 2015).